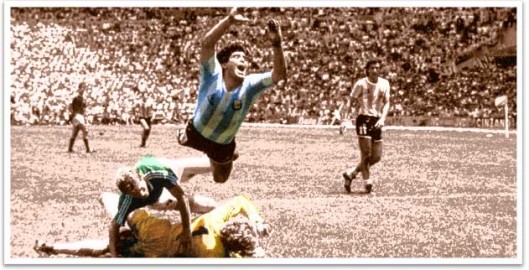 While I may not be a huge sports fan, the World Cup is my favorite sporting event by far. As a kid, I remember my family gathering into separate cheering sections in front of the TV for the Germany – Argentina final. That was my first taste of World Cup soccer and the first time I realized I was a big fan.

Now, I’m enjoying the 2014 World Cup as much as ever. As a marketer and graphic designer, I also enjoy seeing the creativity shown in many of the best World Cup marketing campaigns. My favorite ads join the conversation easily and show the brand in a great light.

The World Cup is a marketer’s dream

As the most watched television event on the planet, the World Cup is a fantastic opportunity for marketers and brands. Since the whole world is watching, many companies spend considerable time, money and effort to get in front of this fanatical audience. And by being agile and creative, some brands have been able to jump in without a huge advertising budget.

Let’s take a closer look at some of my favorite World Cup ads and marketing campaigns so far.

It’s not easy to find the perfect message to align your brand with a global sporting event. Get this wrong and your efforts may look forced or even embarrassing. Get it right and your message is enjoyed by millions of potential customers. Despite this challenge, some brands have shown that they understand the game, its fans and their audience.

Hyundai found a smart yet subtle way to show their car while appealing to soccer fans. In this television commercial, a fan scrambles to avoid spoilers all day so that he can rush home in his Hyundai and watch the World Cup games he recorded while at work.

This reminds me of my husband and really shows that they knew many soccer fans would be in the same situation. I’m sure these TV ads weren’t cheap but Hyundai is making it count by running it on both the English and Spanish-speaking channels using US and Mexican jerseys, respectively. Smart stuff.

I really like this campaign from Beats by Dre. This ad features fantastic product placements and really shows “The Game Before The Game”. They made their product look like the must-have headphones for athletes and musicians. And it doesn’t hurt to have Neymar, LeBron James and Lil Wayne drive that point home.

While they may be taking themselves a bit too seriously, this ad highlights the importance of the World Cup and the anticipation leading up to the games. It represents the brand well and sells their product. What more can you ask for?

Creativity and agility save the day

By being creative and agile, some brands have been able to join in even without blockbuster budgets.

If you’ve watched the games, you may have noticed the referees using a white spray to mark the spot for the wall on free kicks. The agency for Sure deodorant, DLKW Lowe, created a clever print ad and social media campaign that tied in their client’s product and strengthened their brand promise to not leave white marks. They recognized an opportunity and acted quickly to deliver a branded World Cup marketing campaign.

One of the most controversial moments of the World Cup came when Luis Suarez, the star striker from Uruguay, bit an Italian defender on the shoulder during a game. All of a sudden, everyone was talking more about the Suarez bite than soccer.

The Snickers team had the agility to tweet a simple yet funny response to the controversy. They moved quickly and showed a bit of courage by tweeting their message directly to Suarez. Not only did their message get seen by thousands of people on Twitter, it was also picked up by a bunch of websites – giving them even more exposure. And what did it cost them? Just a little time, effort and a lot of creativity.

I think all of these brands do a great job of appealing to World Cup fans in genuine ways. And being creative, agile or funny always helps.